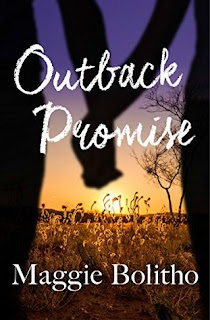 I liked this book a lot.  Maggie Bolitho has the sort of innate gift for the written word that makes my editing/critiquing hat fall off unnoticed, allowing me to just read and enjoy, which is, of course, the best way.


Outback Promise is about the marriage of Ros and Grady.  Six years after their four year old son, Cadel, was killed in a tragic accident, their marriage has faltered, and they decide to go on a three month trip across the Australian Outback to 'find each other' again.   This story was not one that immediately appealed to me as the subject matter of a family losing a child is possibly the last I'd want to read about (I am childfree and like to read for escapism, mostly!), but the Outback aspect appealed a great deal, as it's something I'd love to do.

I was pleasantly surprised.  The first half of the book follows one of my favourite structures: alternating chapters between past and present, to show how the characters got to where they're at now.  I didn't find the bits about Cadel's death and Ros and Grady's subsequent pain to be something I had to wade through at all, as I'd feared; Ms Bolitho's writing is clear and spare, never wordy or contrived, and it was actually very moving.

The Outback trip starts approximately half way through and at first I worried that I was about to read pages and pages of emotional zig-zagging, but it picked up quickly, with two notable highlights: a ghastly couple called Nestor and Max who they met at one campsite (I loved them, a terrific piece of writing, they were drawn so perfectly I could actually see them!), and an encounter with a couple of poachers.

I very much enjoyed reading about the trip.  My favourite characters tended to be the secondary ones, but they all 'worked'.  I didn't particularly warm to Grady, and only a little more to Ros, who I found a trifle self-absorbed, though this isn't a criticism of the book; Ros is a woman with much 'baggage', and she began to understand herself better as the story came to a close.  There was one incident near the end that really spoke to me.  Grady had been out on a boat with friends, she'd stayed behind because she suffered from seasickness.  Afterwards she was expecting him home and wanted to do the romantic dinner thing, but he stayed in the pub, having a rip-roaring time with his friends.  He wanted her to join him, but she said no, because it didn't fit in with her idealistic image of how their evening would be.  I wanted to shout at her, "Go!  He wants you to be there, think about what he wants and be spontaneous!" ~ because Grady didn't want a 'romantic' meal, he just wanted her to join him.


I was completely absorbed in the story all the time I was reading this book, and would recommend it to anyone who enjoys a well-written, contemporary, relationship-based drama.  I'll certainly read more by this author.