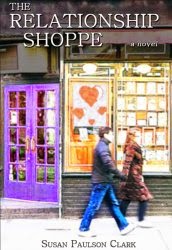 Marian Sheffield and her friend Belle start a website and bookshop based around self-help for people suffering relationship difficulties and break-ups.  In the meantime, though, they are both working through their own post-divorce transitional periods, and coming to terms with single life and meeting new men.  Central also to the story is a singles' group, the structure of which I have to say I found rather odd, but this might be just because of cultural differences between England and Texas, where the book is set.

I found this book to be written in an easily readable, conversational fashion, with many elements in it to which women might relate.  I liked the way in which the story is half love stuff and half business, the latter of which I found interesting.  Ms Clark writes well, and the book is professionally presented with minimal errors.  Some of the characters are cleverly drawn: the volatile Belle, her horrible father, and the hilarious Agnes—the slightly nutty middle-aged woman who isn't able to move on from her marriage break-up that happened years and years previously.   Some good comedic moments there!  The character that didn't work for me, though, was Marian.  Sadly, I couldn't 'see' her at all.  Much of the time she comes across as a tad sanctimonious and too set in her expectations of people for a girl in her twenties.  Alas, her understanding of others seems to come mostly from the pages of the books she sells; I wasn't sure if this was done on purpose or not.

Generally, I felt the book needed a good content edit.  There is a fair bit of unnecessary activity at the beginning; Belle's walking out of the business then walking back in, and an unrealistic scene in which Marian walks out of her job to work full time on Stairstepz; a single woman with children to support, walking out of a well paid job because of a remark made by her boss?  Okay, it happens!  But there are too many coincidences—a chance meeting with someone in a café who's perfectly placed to help her, a friend's son who just happens to invest in new technology businesses—a lot of exposition, and developments/character reactions that were not particularly feasible but just there to move the plot along, sometimes to the point of being contradictory to what's been said before.  However, this all lessens as the book progresses.

I did guess who Marian was going to end up with very early on in the book though I don't think it was glaringly obvious, and I found the whole attitude towards relationships a little old-fashioned but, again, this might be just cultural differences.  To sum up, it's a novel with a lot of potential by a writer with talent; it just needs a bit of sorting out!