THE GODS OF SANIBEL by Brian Cook

How I discovered this book: it was submitted to Rosie's Book Review Team, of which I am a member. 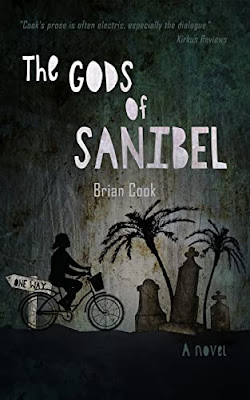 An interesting book.  I was slightly put off at the start, because the main female character's name is 'Kak', a nick-name because her initials are K.A.K.  The American author probably does not know that the word 'cack' is English slang for faeces - I winced every time I read it!
Basically, the story is about Kak and Rudy, who meet at defining moments of their lives.  Kak's problem is that she does not want to become an appendage to her husband-to-be, a handsome, rich doctor from a wealthy, controlling family.  Rudy is a corporate big shot, and has an epiphany when he sees how company policy has brought devastation to workers further down the chain in the company he makes money for.
I loved reading Rudy's sections - he was a great character, so likable, and I enjoyed reading all about the hellish world of amassing the billions at any cost.  I was not so keen on Kak, who came across (to me, anyway) as dithery and self-indulgent and, like Rudy, I grew tired of her talking in semi-riddles.  The main problem for me about the whole plot was this: if she didn't want to marry Phillip, why didn't she just ... not marry him?  There didn't appear to be any love there.  She could have just walked away.
Despite a few editing errors (names changing, the odd homonym - I think Phillip becomes Andrew at one point), the writing itself is great.  The dialogue is tight, realistic and amusing, with some great throw-away remarks and quips.  This was what made me want to keep reading, as well as finding out what happened.  I found the novel somewhat disjointed at first and kept having to go back so I could work out what was actually happening when - dates might have helped - but it sorts itself out by about 10%.
To sum up - there is a lot of good stuff in this book, but I think it could do with another draft or two.
Posted by Terry Tyler at 04:27 1 comment:
Labels: 3.5 stars, Brian Cook, drama, psychological drama, Rosie Amber's book review team, Terry Tyler Book Reviews, The Gods of Sanibel
Newer Posts Older Posts Home
Subscribe to: Posts (Atom)