THE LIFELINE by Deborah Swift @swiftstory 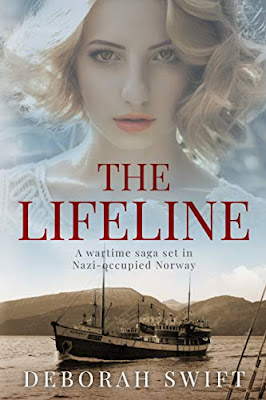 How I discovered this book: Deborah Swift is one of my favourite writers, so I bought this as soon as it was available.
In a Nutshell: Dangerous escapes from Nazi-occupied Norway
I enjoyed this book immensely - there is never a dull moment, with a sense of spine-chilling danger throughout.  The action picks up as the book goes on, making it a real page-turner; I read the last 40% in one go (just finished it!).
The book is set in Nazi-occupied Norway in the early years of WW2.  The main characters are a Resistance worker, Jørgen Nystrøm, and his girlfriend, Astrid Dahl.  Jørgen's cover is blown early on, and the two are separated. Astrid is a teacher who becomes involved in low-key rebellions against the Nazi regime, but soon finds that she has bitten off more than she can chew, and her only chance of evading transportation to the camps and almost certain death is to join some others in their escape from Oslo.
The story follows Jørgen's hazardous path to the Shetland Islands, where he carries on his work with the British against the Nazis, and Astrid's terrifying journey through Norway, during which there are so many setbacks and dire turns of fate that I was gripped throughout.  It is clear that the author's research into the time and place has been extensive, and every aspect of these dangerous few years is completely convincing.  Incidentally, I was interested to read that until five or six hundred years ago, Shetland was part of Norway.
If you're a fan of WW2 dramas and nail-biting stories of brave escape, you will love this book - and a round of applause to Ms Swift for not making the romantic minor sub-plot turn out predictably!
Posted by Terry Tyler at 11:12 4 comments:
Labels: 5 stars, adventure, Deborah Swift, escape, history, Norway, Terry Tyler Book Reviews, The Lifeline, WW2

The Other Mrs Samson by Ralph Webster #RBRT 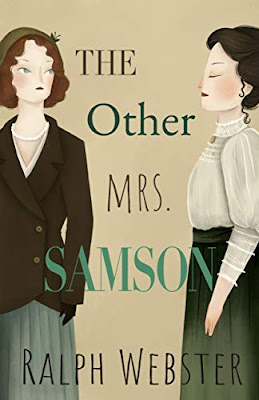 How I discovered this book: it was submitted to Rosie's Book Review Team, of which I am a member.
In a Nutshell: Family drama covering WW1 and WW2
This book, for me, went from nicely readable and moderately interesting, to absolutely unputdownable, and back to moderately interesting.  The first narrator, in the present day, finds a secret horde of papers belonging to his recently deceased, ninety-five-year-old friend Katie Samson, from which he surmises that her husband had been married before.  At this point, although not enthralled, I thought, well, this is certainly no chore to read, being nicely written and with the possibility of a great story to come.
...and whoosh, there it was. I turned the page to the POV of Hilda, the first wife, and the book bloomed, opened up, emerged from black and white into glorious technicolour.  Hilda's story went back as far as her grandparents' experience in San Francisco Gold Rush days, and on to the making of that city, the role of women in the Victorian era, life in a small Bavarian village, changing times and growing problems in Europe, to do with Germany's place in the world - I was gripped, all the way through.  Hilda and her grandmother were so alive, and aside from being a great story with wonderful characters, it was historically informative.  Fascinating.  Loved it.
Next came Katie's POV, and at first I still liked it a lot, as I read about her family tragedies, the aftermath of WW1 and Berlin's 'Roaring Twenties', the effects of American's Great Depression on the rest of the world, the Nazi party's growing control, and her and lover Josef's route out.  Then the lead up to the WW2 ... and I'm afraid it all went a bit flat for me, lacking in emotion.  The threat to Josef, a Jew, was described as 'very unsettling';  I read of an escape into the woods when Nazis arrive at their door, and their luck at being able to move from one place to another just in time, before the Gestapo established travel restrictions, but there was no drama or sense of danger.  Hilda told her own highly compelling story with the history as the backdrop, as did Katie at first, but the latter part felt impersonal, as though she was just listing events.

I was disappointed by my disappointment, if you know what I mean, because I loved the book so much earlier on; for instance, Katie's only brother, Karl, joins the Nazi party and gains a position of authority, but that's all—we never hear about him again; I'd hoped for a storyline about this.  There was a twist at the end, but it felt a little rushed.
Four stars on Amazon because Hilda's part was absolutely 5* plus, and because the author writes in an extremely accessible fashion, so that even the parts I liked less were no effort to read.  I would recommend it to readers who like a family drama and are interested in reading about the history of the times mentioned - and it's worth getting just for the middle section.
Posted by Terry Tyler at 07:22 5 comments:
Labels: 4 out of 5 stars, 4 stars, Berlin, Family Drama, history, Ralph Webster, Rosie Amber's book review team, San Francisco, Terry Tyler Book Reviews, The Other Mrs Samson, WW1, WW2
Newer Posts Older Posts Home
Subscribe to: Posts (Atom)