On Amazon UK
On Amazon.com
On Goodreads and BookBub 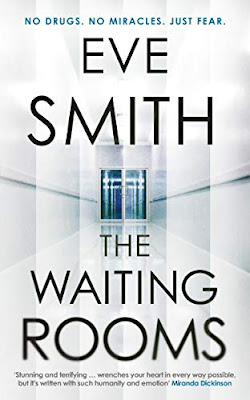 How I discovered this book: Amazon Browse

In a Nutshell: dystopian alternative present, post-'Crisis', in which everyone lives in fear of viruses.  Yes, I'm aware of the irony in that sentence.

I gathered that this book is set not in the future but in an alternative though chillingly relevant fictional present; there are some suggestions of the years in which events took place, though not many.  At some point which I took to be the recent past, the 'Crisis' has occurred: over 200 million deaths and counting, as spiralling drug resistance means that ordinary infections can kill, and the availability of antibiotics that actually work is severely limited.  Seventy years old is the cut-off point for being allowed anything but over-the-counter medication.  If ill, men and women wait for a painful death, or can choose to end their own lives.

The narrative zig-zags between present and past, a structure I always like, as the meshing of the two timelines is gradually revealed.  Kate, a nurse in the restriction and doom-filled present, has a husband and daughter, but knows she was adopted.  The other main present day POV is that of Lily, a woman in a private care home facing her seventieth birthday.  The chapters in the past centre around Mary, a biologist in South Africa, who meets the married Piet Bekker, and begins a love affair.  It is clear almost from the start that Mary later becomes 'Lily' (ie, this is not a spoiler); the reasons why are revealed slowly, throughout the book.  The plot centres round the Crisis itself, the part Mary and Bekker played in the TB pandemic, and family secrets.

I enjoyed reading this unusual story, which brings to mind many frightening real life predictions.  The contrast between Lily and Kate's world in the present and Mary and Bekker's carefree life at the end of the last century is heartrending, and makes me glad I am old enough to remember the 1960s-90s.  A most memorable part for me was Mary's obsessive love for Bekker; her every emotion and action were so real.  Bekker was horribly arrogant, and I felt so sad for her, especially as time went on; the 'other woman' is so often seen as a person whose feelings are of no importance.  In order to avoid facing up to choices made by the husband and father, the family is inclined to place all blame on the girlfriend.

As for Africa, the sense of place was so vivid; it made me feel nostalgic for somewhere I have not been.

There were a couple of aspects about which I was not so sure; I couldn't work out why Lily, at just sixty-nine, seemed more like a woman in her nineties.  She had crippling arthritis, but the other descriptions of her (papery skin, wispy white hair, etc) seemed unlikely.  Several of my friends are in their late sixties, and look much the same as I do (I'm 61); my mother didn't seem that decrepit even in her late eighties, and she had Alzheimer's.  It's possible that I missed something; there was a lot of information to take in (if I did, please tell me!).  Also,  I wished there had been a little more explanation of the Crisis itself, exactly how it unfolded, what actually happened, rather than just snapshots; the accounts were a little haphazard, and I felt it was here that the zig-zagging between time periods came unstuck.  A bit of chronology might have helped.

On the whole, though, it's one of those 'not 5* but better than 4*' books, and one I definitely recommend.

THE 5TH WAVE by Rick Yancey

On Amazon UK
On Amazon.com 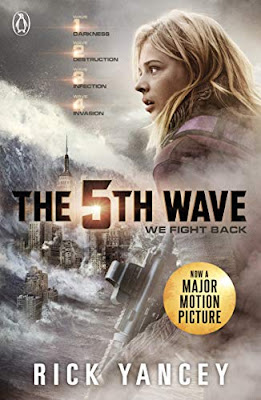 How I discovered this book: Amazon Browse

In A Nutshell: Post Apocalyptic thriller, with EMP blackouts, tsunamis, pestilence and aliens (yep, it's got the lot!). It is also YA.

I didn't realise when I bought this book that it's YA.  I've recently read other post-apocalyptic books in which the main characters were adolescent, that didn't feel YA at all.  It was only later that I looked at its categories on Amazon, and discovered the intended audience.

That having been said, at first I loved it.  Starts with Cassie, who is 16, in the later stages (the 4th wave) of the takeover of Earth by aliens.  Back to when they first appear - a ship, hovering near us in space for 10 days, while the entire country is in uproar about what it might mean.

The 1st wave is an EMP blackout that wipes out the electrical grid.  The 2nd is a spate of tsunamis around all coastal areas, forcing survivors into the centre of all countries.  3rd, a plague that wipes out 97% of humanity.  The 4th is discovered only gradually - apparent humans who are 'infested' with something that alters their brains to make them think like the aliens.

First we see what happens to Cassie, from the 1st-4th waves.  Next, a chapter from the POV of a teenage boy, who actually survives the plague.  Thirdly, one from the POV of one of the soldiers whose was impregnanted with whatever it is that the aliens put there - this happened 4 years before.  This part, in particular, I found most absorbing.

Then we go forward a little and find Cassie trapped in the snow, almost dead.  This is where the book fell down for me.  Her saviour just happens to be an amazingly hot-looking guy of around 18, who is living in a cabin alone.  Somehow, he has all the equipment and know-how to save her from certain death.  Despite them having lost everything, being in horrendous danger and, no doubt, deep shock, the two engage in flirtatious teen banter, and it becomes more like the sort of romance I would have abandoned even when I was at the younger end of the book's target market.  So I stopped reading it, which was shame, because the rest of it was SO good.  I might go back to it, and just skip-read the romance bits.  I'm not sure.

I wouldn't normally review a book I didn't finish, but I am doing so because a) I had already set up this page with the links, b) the rest of it was extremely good, and c) it might help other YA writers to realise that 'teenage' doesn't mean 'unaware that developments are ludicrous'.  On the other hand, it's got literally thousands of great reviews, so maybe it's just me.  On the other other hand, some of the lower star ones also complain about the emphasis on the teen crush, rather than the excellent plot.  So maybe it's not. 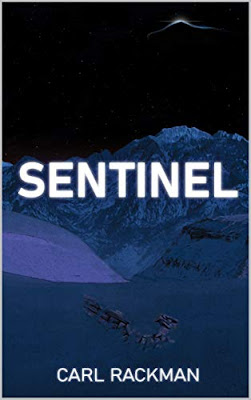 How I discovered this book: it was submitted to Rosie's Book Review Team, of which I am a member, but I'd bought it anyway, as I've very much liked other books by this author.

In A Nutshell: Government conspiracy/sci-fi thriller

This is the sequel to Rackman's Voyager, which I haven't read, but it totally works as a stand-alone; there is enough information about what happened before, without long, tedious explanations.  Could actually be presented as a masterclass in how to do this!

Former pilot Matt Ramprakash is now an aviation expert for M15, and, along with many from other government agencies, etc, awaits assitance from anti-terrorism body Sentinel in taking action on a hijacked plane - but who are the hijackers?  The discovery that his old enemy, the Triumvirate, are involved, leads him to Antarctica, along with Sentinel, his wife - and Mirage, a 'supersoldier' who has been genetically engineered - or has she?

As I was reading this, it occurred to me that Carl Rackman has invented his own genre - seemingly earthbound thrillers that end up being a bit paranormal, without it seeming weird.  Works very well!  The amount of research that has gone into this book is evident; it's highly professional, extremely well-written, and should appeal to anyone who loves an intricate government thriller.  With some alien stuff thrown in.  I read at the end that a third book is planned - I would love to see some of it from the point of view of the Visitors.  The ending was one of the best I have seen for this type of book—the sort that makes you want to open the next instalment immediately.

I felt it could have been edited down a little in places, with less factual detail and fewer conversational exchanges, to tighten up the pace, but that could be just personal preference; it's a smart, intelligent novel of which the author should be most proud.  And I know it's a cliché, but it really would make a fabulous TV series! 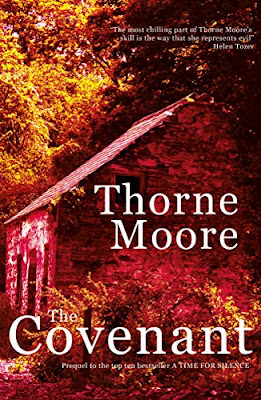 How I discovered this book: it was submitted to Rosie's Book Review Team, of which I am a member.

In A Nutshell: Dark family drama set in Pembrokeshire, at the end of the 19th and the beginning of the 20th century.

This doom-laden tale about the Owen family and their land begins with a mystery: the discovery of a body, declared to be that that of Leah Owen, who happens to be the main character of the novel—but this is in no way a spoiler.  If anything, it provided added intrigue to the story, which then goes back in time to Leah's childhood.  Much later, the why and how of the initial chapter comes as a total surprise.

Life on Cwmderwen is hard, with strict adherence to the word of God—and that of Thomas Owen, head of the family, who becomes a religious zealot to the point of insanity after the death of his eldest son.  Leah's entire life is ruled by duty to family and farm, and the restrictions of religion.  Her bright childhood spirit is quelled by bereavement and loss of love—happiness is snatched from her at every turn.  Aside from the day to day problems (scratching a living, troublesome rellies and a wrathful killjoy of a god), Leah also has to contend with the malignant presence of slimy businessman Eli John, who has unwelcome influence over their lives.

I was completely absorbed in this book all the way through; it's so well-written, every character clearly defined, every piece of research unobtrusive (and it is clear that the author knows her subject so well), every dark, dismal day in the Welsh valleys so real.  Although it is most definitely worth 5* for the quality of the writing and the story itself, I was initially going to take off a half star because of personal taste; I found this book more depressing than any novel of stark dystopian futures, simply because of the lives wasted and made unhappy because of the barmy religious and social protocols of the day.  But the end was uplifting indeed, enough to make me revise that; Thorne Moore, you have earned that extra half star!

If you love nitty-gritty, no-frills family sagas set in relatively recent times, you will ADORE this.  Even if they're not quite your thing, you'll still love it.  I did.  I read at the end that it's actually a prequel to A Time For Silence, which I have just bought.  There—that proves I loved it!