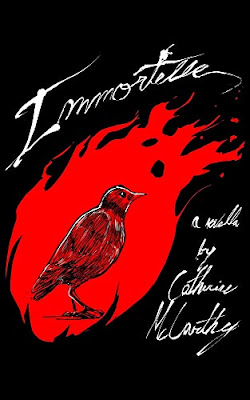 How I discovered this book: I've read short stories by this author and liked them very much; thus, I bought!
In a Nutshell: Novella, dark mystery/ghost/mild thriller, set in rural Wales about a hundred years ago (I think).
The story is about Elinor, a ceramic artist interested in pagan and supernatural folklore/magic, whose daughter Rowena dies under mysterious circumstances.  In her grief, Elinor starts work on an immortelle (a ceramic, glass-domed wreath, particularly popular in the Victorian and Edwardian eras) as a memento as a memento for Rowena's grave.
Soon, many local people are asking her to make immortelles for their own dead loved ones, and, around a year later, one of the departed recipients appears to her.  Elinor has always had suspicions about Rowena's death, and believes that at some point her fears will be confirmed.
As with the other stories I've read by Catherine McCarthy, this one reeks of Welsh mysticism and secrets hidden in the hills, floating by on the wind or trickling in with the tide.  It is beautifully written, with not a drop in quality all the way through; it is this, and the atmosphere Ms McCarthy creates, that made this a page turner throughout, even in the middle section which is more concerned with emotion than events.  Such was the subtle build up of suspense that I felt, all the way through, as if there might be a truly shocking occurrence just round the corner.
I'd class it as a low-key supernatural mystery rather than horror, though it does have that dark, sinister quality to it that this author pulls off so well; it probably comes naturally, as she was clearly born to write this stuff!  The story totally works; it fits nicely into the novella length with an ending that is pleasing on several levels.
Posted by Terry Tyler at 05:08