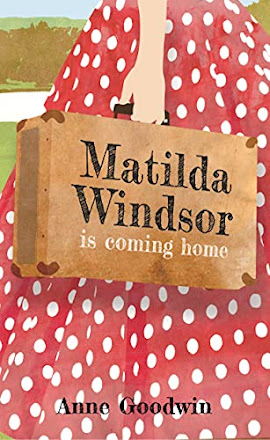 How I discovered this book: it was submitted to Rosie's Book Review Team, of which I am a member.
In a Nutshell: Unusual family drama.
I thoroughly enjoyed this novel, which is both entertaining and incredibly sad.  It is set mostly in 1989/90, with flashbacks to the 1930s, and Matty Osborne, also known as Matilda Windsor, has been a resident in psychiatric hospitals for fifty years - since she was around twenty.  The reason given at the time was 'moral turpitude' - in other words, becoming pregnant without being married.  I remember seeing something on television once, a long time ago, about how, in the first half of this century, young girls who were committed to asylums for getting pregnant, and were never let out again.  In this circumstance, Matty eventually lost her mind; her path to this state is not revealed until the end of the book.
She believes that she is in her own stately home - sometimes during the Great War, at other times during World War II - that the other residents are her guests, and the carers are her staff.  The story weaves between three points of view: Matty, a young carer called Janice, and Matty's younger half-brother Henry who doesn't know where she is or why she left home.  The staff of Tuke House have no idea whatsoever what goes on in Matty's head, or probably within the head of any of the residents.  Janice is likable and fun, and I enjoyed the portrayals of the people she worked with, most of them ghastly, grey jobsworths with limited imagination.  She is very much a young woman of the Thatcher years with anti-Thatcher ideals; I felt such a sense of going back over 3 decades when I read about her.
I guessed early on what had led to Matty's dreadful fate, but it's not obvious, and I did change my mind a few times; either way, the fact that we don't know 'how, who and why' adds to the page-turning quality of the book.  When I got to the end of her 1930s story, I could have cried at how alone she was, how there was no-one, anywhere, who would listen to and believe her.  It was so tragic, so shocking, made even more so because you know that this sort of thing happened to so many girls, never mind the stories of some of her friends in the unmarried mothers' home.
Another element that adds to the suspense is Henry's search for the long lost sister he hardly remembers, and all the near misses when he could have found her but didn't.  They're frustrating; each time I though, oh, they're going to find each other!
I found this book particularly interesting because I've worked at a psychiatric hospital in the past, and because I was reminded of my late mother, who had Alzheimer's for eleven years and lived in a care home for the last seven or so years of her life.  I visited her often; I remember her being under the impression that the place was a hotel, and the carers were waitresses.
Although this story has a certain amount of resolution, I gather there is to be a sequel.  I admit to being a little disappointed as I expected to get to the end and have everything nicely wrapped up - but life isn't like that, and the stories of Matty, Janice and Henry will continue.  I look forward to reading the next book when it appears!
Posted by Terry Tyler at 08:11