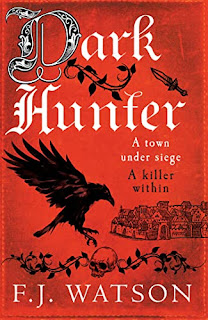 How I discovered this book: it was submitted to Rosie's Book Review Team, of which I am a member.
In a Nutshell: 14th Century murder mystery set in Berwick during the wars with Scotland.
This novel's background is factual; it centres around the early 14th Century territory wars between Scotland, led by Robert the Bruce, and England with its ineffectual King Edward II.
Squire Benedict Russell has joined the English-held garrison of Berwick-on-Tweed, but soon finds that his attention is taken up by the murder of a young woman from a good family; he is given the task of finding her killer.
Rather than the murder mystery, it was the setting and the era that made me choose the book, as I love reading about both Plantagenet history and wars, and have been to Berwick several times.  I did guess the identity of the murderer early on, but this did not matter because, for me, Benedict's sleuthing activities came second to the book's greatest strength: the intricate detail about the people and how they lived, their customs, beliefs, every day life, all woven so seamlessly into the narrative, which flowed so well.  I've rarely read a piece of historical fiction that put me so much in the place and time.
There are a lot of characters, many with similar names so I admit to getting a tad confused at times.  I didn't know which were real and which were fictional; a short 'afterword' might have been useful, so that the reader could discover which fictional characters were based on actual historical figures, etc, and what happened afterwards (though I did hit the internet for more information after I'd finished the book!).
F J Watson must surely be something of an authority on the history of the town; I'd say this book is a must-read for anyone who lives in Berwick and is interested in its past.  Fascinating; one of those novels that makes you want to go back in time and see it all.
Incidentally, I discovered on my first visit to Berwick that most consider themselves staunchly English, to the extent that some pubs and shops have the English flag in the window, though everyone I spoke to behind bars and shop counters had a Scottish accent :)
Posted by Terry Tyler at 11:25
Labels: Rosie Amber's book review team, Terry Tyler Book Reviews