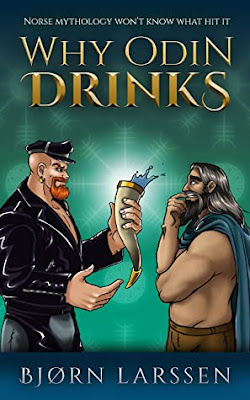 How I discovered this book: it was submitted to Rosie's Book Review Team, of which I am a member.
In a Nutshell: A Norse God with Imposter Syndrome...
I read the first episode of Bjørn Larssen's (very) alternative Norse mythology, Creation, which is now incorporated into this book - this is good, because I was able to re-read it before embarking on the confused All-Father's further adventures.
I think I would need to know a lot more about Norse mythology than I do in order to fully appreciate this, though I did look up bits and bobs here and there, which helped.  The idea of portraying Odin as rather hesitant and not quite sure of his role as ultimate creator, is inspired.  Problem is that he and all the other gods (and versions of Odin in the past, present and future) know about everything that will be (which seems logical, what with them being deities), but are not always sure whether items or concepts actually exist yet.  Like Odin's wife Frigg not being sure what a miniskirt is, but knowing she wants one.
'What sort of tea will you have?'
'They haven't discovered it yet,' said Urðr.  'He looks like the lapsang souchong type to me, though.'
One of my favourite aspects was the occasional presence of 'literature'.  She is an entity that whispers to Odin's mind a piece of information pertaining to something that has just been said, such as 'Loki is foreshadowing', but Odin cannot see her; he just hears the sound of her sneakers as she sprints away.  I love that.
In parts 2-4 we meet many more gods - Loki, Freya and Freyr, and Frigg.  Freya, goddess of love, beauty, fertility, sex, war and gold (pretty much all the most important things to a Norseman, one imagines) is portrayed as a sort of Paris Hilton type, which I thought was genius.
'As he travelled, Odin thoroughly investigated people of all shapes and sizes, casually letting it slip that he was the All-Father'.
Some of the time the references went over my head because of my lack of knowledge of the subject, though other times I felt the prose needed a bit of tightening up; it seemed to career away with itself now and again.  However, the good is very very good, and I also liked the pertinent observations about life and death, time and war, woven amongst the ridiculousness.  And the ending.  Clever.
A light-hearted romp through Norse mythology, and a fitting development for Bjørn Larssen's comedic talent!
I laugh every time I look at this - the grinning Odin doing a thumbs up! 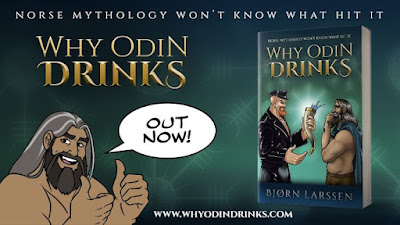