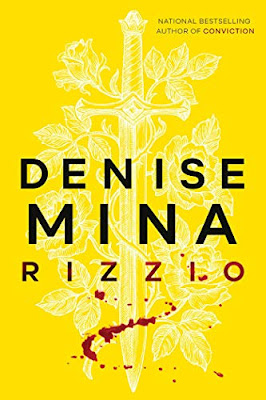 How I discovered this book: it was submitted to Rosie's Book Review Team, of which I am a member.
In a Nutshell: Novella about Mary, Queen of Scots
The first word that came to mind when I was thinking how to describe this book was 'enchanting', though the story itself is the very opposite.  The way in which it is written, however, is a delight indeed, even down to the off-the-wall chapter headings.  The shocking story of the murder of David Rizzio, servant, advisor and friend to Mary, Queen of Scots, bounces along in page-turning fashion, with a whisper of almost humorous cynicism as the author narrates the appalling events of the few days in question.
It is a chilling irony that the hornéd demons who stormed the Queen's apartments in Holyrood Palace claimed to be motivated partly by divisions in the Christian church - this grisly moment in history could have come straight from an anthology entitled 'The Devil and his Work'.  Also that the unborn child the demonic lords were so keen to write off actually became James VI of Scotland and James I of England - named by Elizabeth I as her successor.
Spoiled wastrel Lord Darnley - Mary's husband who threw his toys out of his pram when he didn't receive his 'Crown Matrimonial' (the sharing of the reign and the authority to rule in his own right if he outlived her) - was beautifully portrayed, while background information about the activities of his father and some of the other lords who took part in the brutality sent a chill up my spine that remains with me.  This novella brings home what a wild, dark and dangerous place 16th Century Scotland was - every scene is atmospherically perfect, and one is given the feeling that in aristocratic and 'noble' circles, one's life was hanging by a thread pretty much all the time.
I loved what Denise Mina did with the insane Henry Yair, and the 'afterwards' section, when we read what happened to Mary in the years to follow and, most interesting of all, what happened to the Queen's apartments at Holyrood Palace.  Fascinating.  I have to look up more about this!
Excellent.  Loved it.
Posted by Terry Tyler at 07:23
Labels: 16th Century, 5 stars, Denise Mina, history, Mary Queen of Scots, murder, Novella, Rizzio, Rosie Amber's book review team, Scotland, Terry Tyler Book Reviews