How I discovered this book: it was submitted to Rosie's Book Review Team, of which I am a member, though I had actually bought it before that - seen on Twitter.
In a Nutshell: A bereaved woman uncovers an age-old mystery in her new house. 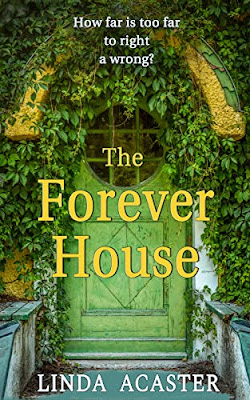 Carrie and husband Jason spent their time buying, renovating and selling houses - but this one Carrie wanted to make their 'forever house'.  Alas, Jason died shortly after work began, leaving her in an emotional wasteland, unsure how she felt about anything at all.  Their only son lives in Australia; she Skypes with Dominic and his family, but it's not enough.  Then there is Louise, Jason's magazine-perfect, high-flying sister, who is suffering too ... but she and Carrie are worlds apart.
The plot unfolds when Carrie finds drawings beneath the plaster in one of the bedrooms, that make her want to find out more about the house's owners of possibly a hundred years ago.  Her obsessive interest in them is surely a means of filling the gap in her life, though she doesn't see this.
I did enjoy this book, and read it in just three days.  It's so well-written; for a while at the beginning it moves slowly, with much detail about Carrie's uncovering of the clues to the family long departed, but I was still engrossed.  The story did not develop as I was expecting it to - it turned out to be something completely different to what I thought I was reading.
This is a nicely rounded-out novel with complex relationship dynamics; the character of Louise I found particularly interesting (though her life depressed me!).  I would recommend it to older readers who like to read about a main character of a 'certain age' representative of older women in the 21st century, and who enjoy a decent mystery and solid, absorbing storytelling.
Posted by Terry Tyler at 04:18
Labels: 4 out of 5 stars, 4 stars, Family Drama, Linda Acaster, murder, murder mystery, Rosie Amber's book review team, Terry Tyler Book Reviews, The Forever House