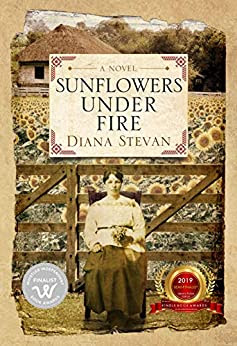 How I discovered this book: it was submitted to Rosie's Book Review Team, of which I am a member.
In a Nutshell: Fictionalised biography, early 20th Century Ukraine.
Even before I began to read this, I was so impressed by what Diana Stevan has done - this is the first part of a partially fictionalised biography of her grandmother, Lukia Mazurets, who Stevan knew as a young child.  In the notes at the back, she writes that her mother told her the story of their lives, and she pieced the rest together by extensive research of the history of that place and time.  The research is evident throughout, without seeming intrusive; the customs and daily toils of such resilient peoples' lives were fascinating to read about.  Also most interesting was the effect of the political situation, from WW1 to 1929, and how little the peasants actually knew; all news about events elsewhere in the country came via word of mouth.  Aside from this, the nature of Lukia's incredibly hard life, with so much tragedy, meant that events happening thousands of miles away were not her immediate concern.
The novel begins in 1915, with her husband going off to fight for the Tsar just as Lukia has given birth to a sixth child - Stevan's mother.  The story is simply written, very readable, and I flew through the first half.  During the last third, I sometimes felt that events were whizzed through too fast, and the storytelling became a little too simplistic, as if she was racing to the end. Now and again I would have liked a little more depth and detail, and did consider that there might be an excess of material for one novel.

In itself this is a marvellous book to have written, and I imagine it is greatly treasured by Stevan's family, but it also stands up as commendable piece of historical fiction about the lives of the common people of a country about which I knew little.  I have the sequel, and look forward to finding out what happens next.
Posted by Terry Tyler at 18:57