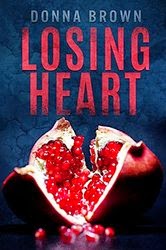 I'll start by saying that this is a terrific plot, a great idea.  Helen has a heart transplant but gets more than she bargains for when the mother of the donor invades her life.  Marion Chambers does so in such a way that at first the reader feels sorry for her, then thinks she's a bit full-on, then realises that there's a lot more to her than meets the eye.  That was good - I didn't expect it.  Losing Heart would make a great thriller film (something like The Hand That Rocks The Cradle) - or a novel.  The problem with the book I've just read is that it's crammed into novelette length.

We find out at the beginning of the story that Helen is having an affair with her doctor, Jack.  There is no build up to this, or explanation for why she is being unfaithful to her husband other than a basic lack of communication.  Helen comes over as a cold, selfish person who cares only about herself and her own needs, from what I could tell from the brevity of the narration, as does Jack, who keeps reassuring Helen that she is perfect and has done nothing wrong, despite the fact that she appears to consider her husband and Marion Chambers nothing more than irritating inconveniences.  When Marion's behaviour becomes more bizarre and overwhelming, however, she has a personality u-turn and just accepts it.  There are some excellent opportunities for development, with a story line that is reasonably well thought out, but it just felt so rushed, as if I was reading a first or second draft, or something with the bare bones written down that is waiting to be fleshed out into a novel.  Period breaks are given with small horizontal lines, but in some cases just plunge straight back into another scene without it being clear who is talking or what is going on.

To sum up, it was good enough for me to get to the end to see what happened; it has potential but needs more work and attention to structure, I think.  Sorry I couldn't be more positive about it; people who like a quick read that concentrates on events rather than character development might enjoy it more.
Posted by Terry Tyler at 06:19